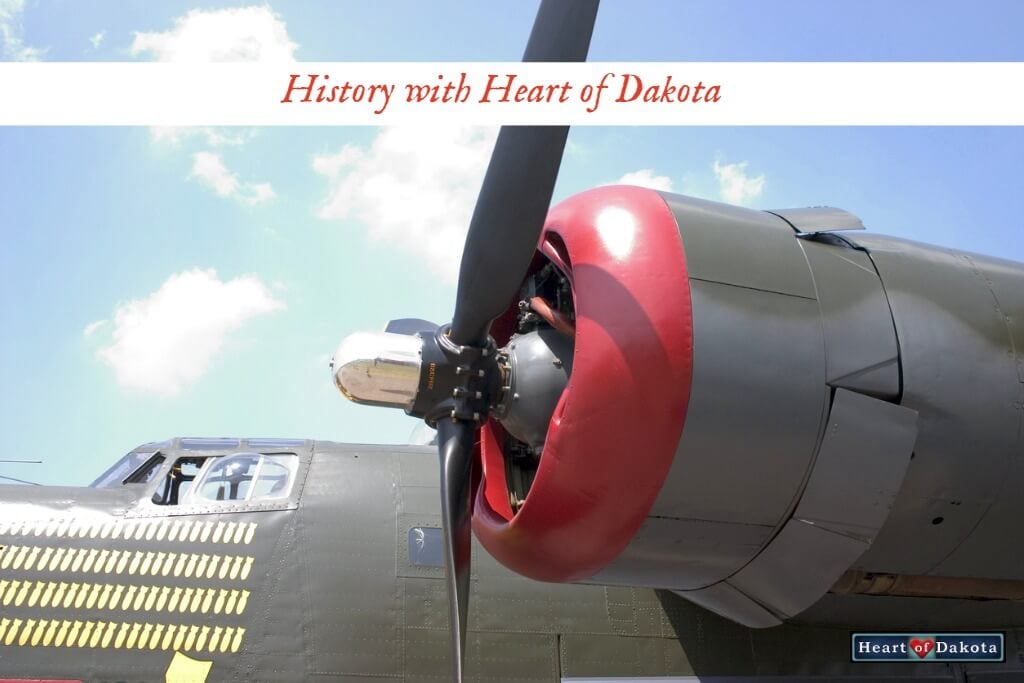 History with Heart of Dakota

“Pilot to gunners. Keep your eyes open. We’re almost to target. By now every German fighter in the area knows where to find us.”

These are the opening sentences in one of my favorite living books ever: Gunner’s Run. Gunner’s Run tells the story of Jim Yoder, a fictional waist gunner for an American B-24 Liberator bomber during the Second World War. One day, during a fateful raid on the German shipyard at Kiel, Jim’s plane is struck by flak and he is forced to parachute out.

Upon landing, he is captured by the Germans, but soon manages to escape captivity. Following his successful escape, he quickly realizes that he is alone…and hundreds of miles deep into enemy territory. Undaunted, he sets out on a journey across Western Europe in an effort to reach England. Along the way, he comes into contact with members of the French resistance and learns how to evade detection in occupied Europe. Will he make it out? Will he be recaptured or – even worse – shot as a spy? You’ll have to read the book to find out!

Why I love this book

First and foremost, Gunner’s Run is a Charlotte Mason-style living book. Better than most textbooks, it makes the history come to life and stays with you long after you turn the last page. It’s one thing to know the facts regarding the air war and the underground resistance during World War II. It’s entirely another thing (and much more memorable) to vicariously experience it for yourself!

Second, Gunner’s Run is historically-accurate. As both a history major in college and a lifelong World War 2 history buff, one of my pet peeves is to read books where the historical backdrop is portrayed incorrectly. Maybe it’s just me, but reading books that do this is like hearing the proverbial nails on the chalkboard. I have a really hard time enjoying those books! At the same time, I’ve also read countless books where the history is correct, but the books have no life in them. Reading those books is comparable to eating sawdust…something to be “gotten through” rather than enjoyed. Gunner’s Run falls into neither of these pitfalls. It is a book that accurately reflects the time period yet still is insanely-immersive to read.

Content-wise, Gunner’s Run is very tasteful. For instance, while swearing and profanity were common enough in World War II bomber crews, the author makes reference to it but tactfully leaves it out of his characters’ dialogue.

With regard to violence, in my opinion the book takes an appropriate balance. Given that it is a story set during one of the most widespread wars in mankind’s history, combat violence is inescapable. Nonetheless, the main character does not relish in it. As a defensive gunner in a bomber aircraft, despite his elation at shooting down a German fighter bent on blasting them from the sky, he is relieved to see the pilot bail out successfully.

Also, while the author doesn’t shy away from mentioning war violence (such as the “bloodstained bodies” that were unloaded from bullet-torn bombers following each mission) he does not glorify the violence by describing it in minute, gory detail. Because of this, even young teenage readers can truly empathize with the hazards the main character faces without danger of becoming unduly traumatized.

Author Rick Barry isn’t afraid to use the correct names for things (Focke-Wulf 190, anyone?) but his penmanship carries readers through – even if they don’t necessarily know all of the period-correct lingo. This is no easy feat, but he pulls it off with flair. His style of writing naturally flows, making it easy to read without sounding choppy or “dumbed-down.” His main character, Jim Yoder, is relatable and genuinely likable. As the story progresses, Jim also grows in maturity. During his time behind enemy lines, Jim is not only portrayed as an Air Force gunner trying to survive his way through World War II, but also as a young man trying to make sense of where God is in all this.

Where in HOD can you find this book?

You can find Gunner’s Run in the Extension Package for Missions to Modern Marvels and the Living Library Packages for US History II.

PS: Want to learn a little more about the B-24 Liberator bomber (and its connection to actor Jimmy Stewart)? Check out this short 3 minute video!