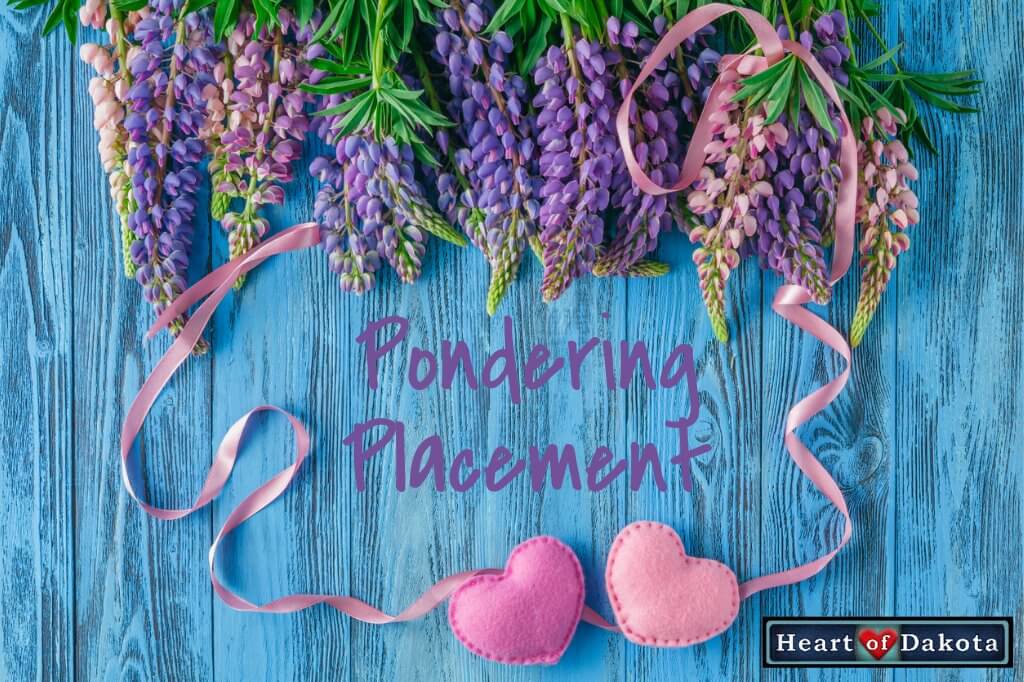 Please help me with placement for my older son who is struggling more than his younger brother.

I’ve used Heart of Dakota with my littles and loved it!  This year, I just started Heart of Dakota with my 9 yo and 12 yo. I need help with placement for my older son, who is struggling more than his younger brother. My 12 yo is allergic to the pencil. He has possible attention problems, and he is an avoider of work in any form.  We placed him in CTC with his 9 yo brother.  To describe the 9 yo, he is an advanced reader and a self-paced learner. Our 12 yo is struggling. I know part of it is attitude. He has some obedience and preteen issues. He struggles with transitions, distractability, and what he needs to do next.

I have many other children to homeschool. I need him to be able to do this, but I think he might have dysgraphia.

With many other little kids all needing my time and direction, I NEED him to be able to do this. Consistently. But, he can’t. I can’t stop what I’m doing with the others every time he finishes to redirect him.  He ends up with unfinished work. I think he is dealing with dysgraphia. I’ve heard the word before, but I just (as in the last 10 minutes) looked into it more fully. We’ve always used Charlotte Mason. Consequently, he has had a heavy oral workload. I think CTC’s written expectations are hitting him hard. My difficulty is deciphering how much is “don’t want to” and how much is “can’t”.  I guess my question is in placement. How do you expect the best from your children while not expecting them to be something/someone they are not?

Answer: It could be your son just needs help from oral to written work, and Preparing Hearts is the guide that does that.

I am so glad that you are sharing this! There are a few things that reverberated with me.  Your older son really struggles with writing, and he has mainly had an oral CM foundation. In looking at the progression of writing, the guide that transitions from oral to written narration is Preparing Hearts. I fear that expecting your 12 year old, no matter what his age, to suddenly be at the level of independence and written work that CTC expects is setting him up for failure. If you are to the point where you are going to being downsizing his writing, then I think a look at Preparing Hearts for your son would be timely.

If we place him in a guide in which we can expect him to do all that is required, we can help him gain needed independence.

I can see that with a 12 year old, it would be preferable to place him in CTC. However, in looking down the road, this placement will always leave you downsizing. It will take away the chance for your son to truly gain the level of independence needed. This is because he will need you by his side to complete what he is being asked to do. Why? Because he did a guide too high at the start. Instead, I’d encourage you to place him in Preparing Hearts with extensions. Then, you can expect him to do ALL of what is required. I also think he’ll need to do Drawn into the Heart of Reading and Rod and Staff. He can move toward doing more written work in both those areas by year end in preparation for CTC.

To avoid having a younger sibling in a higher program, I’d place both children in Preparing.

In considering moving your oldest son down to Preparing, you could also move your 9 year old, unless that child is truly doing everything in CTC right now full-speed and it suits him perfectly. Since he is only 9, I’d be leaning toward moving him down as well to avoid the older child having a younger sibling in a higher program. I think I would put both kiddos in Preparing. Correct placement would also help you know that you can expect them to do everything in the guide. This makes the subjects non-negotiable, which requires less thinking to weigh if your kiddos really can do what is being asked of them.

I have a few sons who needed practice or guidance in the area of writing due to frustration.

My oldest son was allergic to a pencil too, and he really grew into a writer through the years by the time he graduated. So, sometimes it is just that the child hasn’t had much practice or guidance in the area of writing, and it is frustrating them. My third son is a lefty, who has to be a righty, due to an injury to his fingers years ago. He is not a writing lover anyway, and it is a challenge to him. Yet, he has come so far. I try not to compare him to my other boys and just remember that each child has his own strengths and weaknesses. Writing will never come easily to him, yet it is coming! Many kiddos who are challenged in writing sound like they have dysgraphia. Some do, yet many do not.

Independence can take time to gain if a student has not done much reading or independent work on his own.

Another consideration is that if your son has never had much beyond reading on his own for independent work, then independence can take time to gain. A child also needs to be trained and able to do what we are asking him to do independently in the guide. This may mean that he needs the building blocks of the lessons in Preparing Hearts to allow him to be confident of what we asking him to do independently in CTC. I know this these thoughts will take some ruminating upon. However, be encouraged that over time the right placement will not leave you exhausted, but instead leave you encouraged! I want that experience for you!

P.S.  To find out more about HOD in general, click here!