Encouraging Students to Make Oral Narrations Their Own 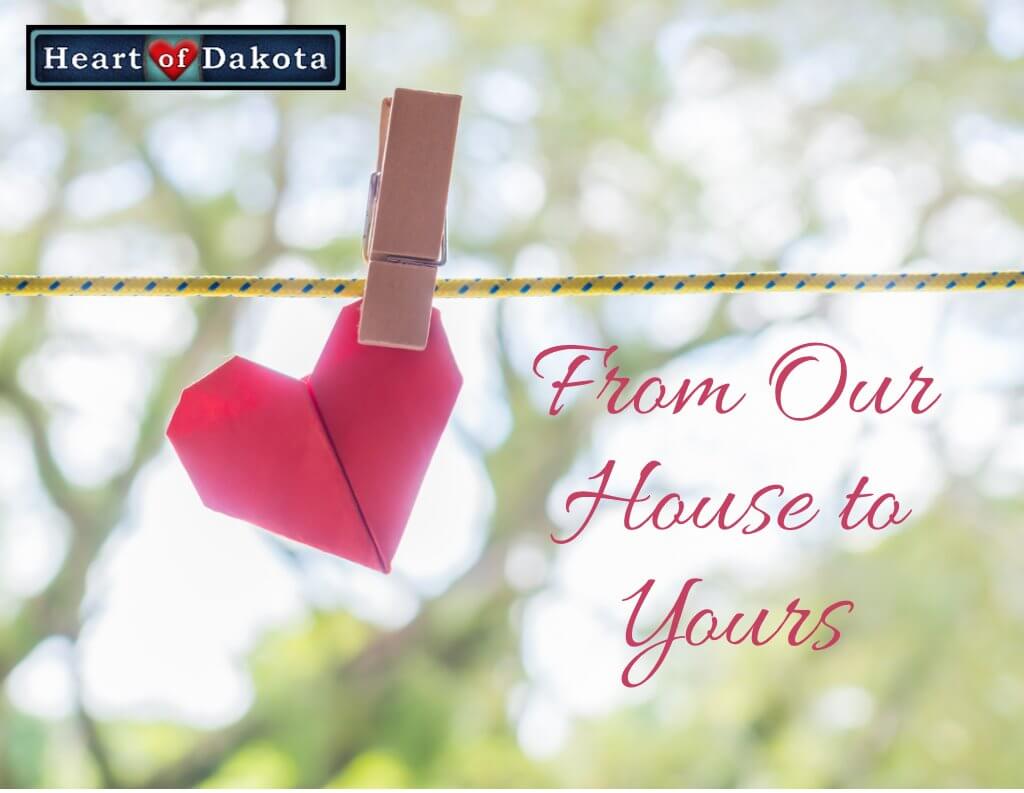 How can we encourage our students to make oral narrations their own?

Narration is a key component of Charlotte Mason’s method of instruction. In simplest terms, narration is the telling back in your own words what you just read or heard. It provides an excellent evaluation method for homeschooling, as the student must do much thinking and assimilating to narrate. No two narrations should be the same. Rather, the student is to ‘make the narration his own.’

Heart of Dakota includes various forms of narration in each guide’s plans as a type of assessment. Each year new kinds of narrations are added, while others continue to be practiced and honed. So, narration is easily a part of a student’s homeschooling just by following the plans in Heart of Dakota’s guides. However, encouraging personal style is a little more difficult to ‘plan.’  So, let’s answer this question for this blog post! How can we encourage our students to make oral narrations their own?

Well, first we can find clues about how to encourage our students to make narrations their own in Charlotte Mason’s own words.

Narrating is not the work of a parrot, but of absorbing into oneself the beautiful thought from the book, making it one’s own and then giving it forth again with just that little touch that comes from one’s own mind. (The Story of Charlotte Mason, p. 125)

We are determined that the children shall love books, therefore we do not interpose ourselves between the book and the child. (Charlotte Mason, Vol. 2, p. 231)

Narrating is an art, like poetry-making or painting, because it is there, in every child’s mind, waiting to be discovered, and is not the result of any process of disciplinary education. A creative fiat calls it forth. ‘Let him narrate’; and the child narrates, fluently, copiously, in ordered sequence, with fit and graphic details, with a just choice of words, without verbosity or tautology, so soon as he can speak with ease. (Charlotte Mason, Vol. 1, p. 231)

Second, we can also find clues about how to encourage our students to make narrations their own in Carrie Austin’s own words.

Children who have gotten into the habit of reading good literature absorb what they will from it themselves, in their own way, whether it’s a lot or a little. Reading living books and narrating from them helps children to begin to form their own literary style. Because they have been in the company of great minds, their style will not be an exact copy of any one in particular, but will instead be shaped as an individual style from the wealth of materials they possess to create a natural style of their own.

Narration done properly develops the power of self-expression and invites a child’s personality to become part of the learning process. A child should choose vocabulary he finds appealing, make it his own, and then give it forth again with that own unique touch that comes from his own mind. This is why no two narrations should be exactly alike, and it is also why teachers should not expect their children to give the same narration they would have given. (Carrie Austin, taken from the Appendix of Heart of Dakota’s guides)

Third, putting it all together, we can encourage our students to make narrations their own in these ways.

So, what are some examples of students making oral narrations their own?

My son, Emmett, likes to give most of his oral narrations cuddled up on the couch with me. He does not want any time to compose himself before narrating. Rather, he likes to charge into it, beginning narrating immediately following the reading. He tends to remember exact phrasing or vocabulary easily. He really seems to love ‘words’ or certain ‘phrases’ and commits them to memory naturally. So, he automatically includes his favorite ‘turn of the phrase’ type quotes from the author within his narrations. His best narrations are those that I’ve remembered to tell him he will be narrating prior to the reading. He seems to just pay attention better, and he plans his narration as I read or as he reads.

What type of narration fits Emmett’s style the best, and what type doesn’t?

His favorite type of narration assigned in the plans is the ‘props’ narration. Gathering a few props, he retells the story with incredible detail. During his favorite narration ‘props’ assignment, he narrates for looooooong periods of time. I’ve learned to let him. He loves this narration so much that he will look ahead in the guide. He counts the days until he can narrate in this style again. However, it is the narration he does not enjoy as much, the summary narration, that he needs the most.

I have taught him to notice the subheadings or to think of the biggest things that happen during the reading when he will have to do a summary narration. He doesn’t like it because he can’t work all of his favorite quotes from the author into 5 sentences, but that’s ok. He can on virtually every other kind of narrating, and I’ve grown to love his style of orally narrating because of it!

What if movement is something a narrator wants to incorporate into his style?


My son, Riley, likes to give his oral narrations standing. He is a pacer, and he likes to gesture with his hands. When he was younger, he would fidget on the couch, bumping into me, sloshing my coffee. Sometimes he would be sitting up on his haunches, like a rocket ready to launch! I don’t know why it took so long to occur to me that sitting on the couch next to me was not the best location for his narrations! I guess we just had always read on the couch, and the narration followed.

Anyway, we began to experiment with movement for Riley during his narrations. All did not go well at first. Sometimes he would pace to the next room, his narration fading so I couldn’t hear him anymore. Other times he had something in his hand while gesturing, like a clicky pencil. The pencil began clicking, tapping, flipping, and the storyline was lost.

We ended up settling upon movement was fine within his oral narrations if he stayed in a small area in front of me. Also, gestures and movements had to fit with what he was saying and not detract from it. Finally, he had to imagine he was giving his narration to a group of listeners rather than just ‘mom.’ Riley has made movement a natural part of his narrations now. He does so well!

What type of narration fits Riley’s style the best, and what type doesn’t?

Riley’s favorite kind of narration is the detailed narration. He narrates as if he’s having a conversation with me. He likes to first catch me up on anything I may have missed in the story since the last time he narrated. Really, it is kind of like he’s narrating twice, but I let it go. He loves it! Then, he tells me he’s ‘officially starting his narration.’ He likes to then look at the book, skim it, and mentally plan for a bit before he begins. He usually quotes the first sentence at the start.

During the narration, he includes a fair share of emotions. He laughs telling parts he things are incredulous. During parts that are upsetting or unbelievable to him, he shakes his head or sighs. For exciting parts, he raises his voice – he might even say, “It was just so amazing! I mean, can you believe they were able to build that structure with no machines and have it be rock solid?!? Amazing! Anyway…” He truly interacts with the author by connecting to the storyline, and I have grown to love his style of narrating because of it!

How can a logical narrator add personality and style to narrating?

My son, Wyatt, likes to give his oral narrations sitting separate from me. Often times he will even lay down on the couch as he gives his narration, while I am sitting in the chair opposite him. He finds this much more relaxing than standing in front of me as if he were addressing a group. He also likes a little space between us, sitting separately so he can compose his thoughts. Wyatt is a logical narrator, and he loves to tell stories chronologically, from start to finish. As a younger child, he much preferred summary narrations. He liked how concise they were, and he enjoyed giving sequential points in response to the readings. His narrations sounded somewhat encyclopedia-like, and I did not know how to draw out his personality in them. Turns out I didn’t have to. Time and varied oral narrations planned in the guides did it for me.

What type of narration fits Wyatt’s style the best, and what type doesn’t?

Wyatt is a big picture narrator, and he absolutely loves to read! He always has a book in his hand, in or out of school. This exposure to excellent literature in HOD over time has helped him develop his own narrating style. Years of reading excellent living books have given him countless connections. When I think of Charlotte Mason’s ‘broad-backdrop’ of history needing to be learned prior to putting ‘hooks’ into it for specific time periods, I think of Wyatt. He has the broad backdrop running in his mind seamlessly. Whatever he reads gets simulated into that backdrop, and it makes his oral narrations all the better.

When he narrates about Teddy Roosevelt, it is like he personally knows him. Then I remember he read “To Carry a Big Stick” earlier, and it makes sense to me why he talks about Teddy like an old friend when he’s really narrating on what he read briefly about him in America: The Last Best Hope. He narrates drawing upon all of his years of reading living books and crafting the best big picture narration he can, and I have grown to love his style of narrating because of it!

Students become well-rounded narrators by giving a variety of narrations, rather than just their favorite type.

You may be wondering why I didn’t share what type of narration doesn’t fit Wyatt’s style.  That’s because there isn’t one anymore.  His style has become so adaptable that he can apply it to any kind of narration quite naturally. He enjoys narrating.  Any kind.  To share his thoughts on what he has read is as natural to him as breathing, and he has learned to love it as much as he loves the books he reads.

So, though it is tempting to just have the child narrate in their favorite way all of the time, it does them no favors. Often it is the case that if a narration assignment is not their favorite, they are not as good at it. To encourage our students to be the best narrators they can be, they need to learn to narrate in many different ways. It is through years of exposure to various authors’ styles in living books that your own students’ styles of narration will emerge! And then, through patience and encouragement, you too will be able to say ‘you have grown to love their style of narrating’ because of it!

P.S. To learn more about Charlotte Mason’s written narrations as a form of assessment, click here!

P.S.S. To understand where summarizing comes into narration, click here!