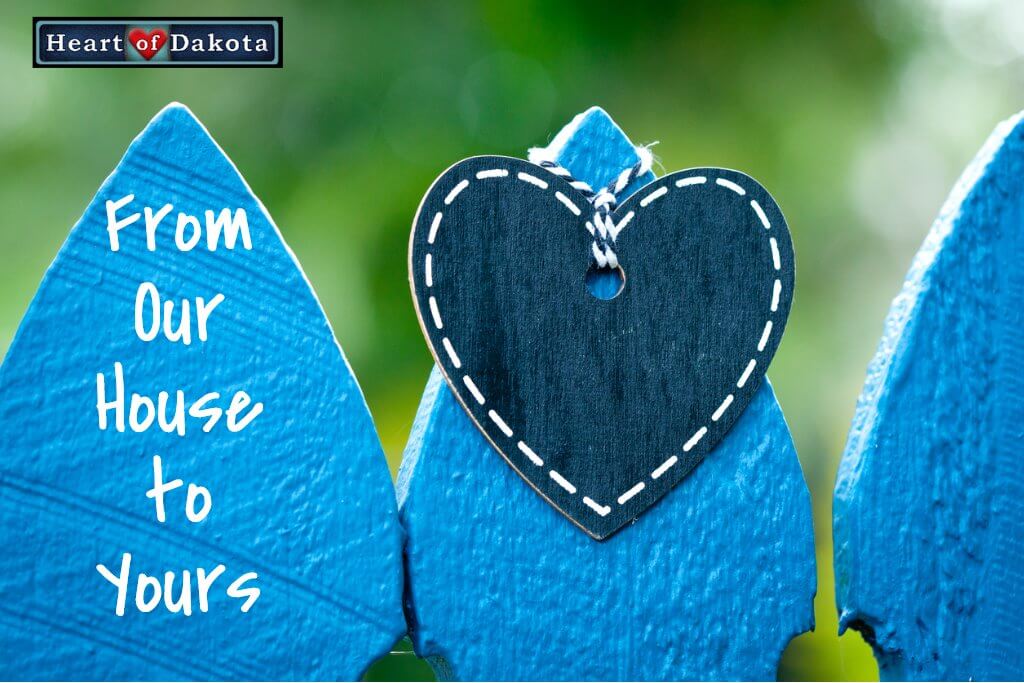 Do you have family time sharing together when students are doing separate guides?

Absolutely! In fact, there are natural times within the day when it just makes sense for our family to share learning. The Roman feast Emmett prepared for his Creation to Christ history activity gave us the perfect time to get together. Emmett dressed in Roman attire and prepared a simple meal. He set places for each of us, explained each course, and served us. Putting his own personality into it, as he often does, he found Roman music online to play in the background. Providing entertainment was another part of the plans in his guide. So, Emmett theatrically read some of his favorite poetry (into a microphone, of course)! He also became our Roman tour guide, giving us an ‘audio tour’ of life based on his storytime City reading.

Riley shared his Essentials in Writing composition with the family as part of the entertainment for the Roman feast.

Riley chose to write his Essentials in Writing essay about the differences between dogs and cats. I really wanted him to share this with his brothers. We own two dogs and one cat, so I knew his brothers would love this essay. Riley worked hard on this composition piece, and all that was left for him to do was a final edit. Reading aloud an essay is a wonderful way to catch mistakes! So, for many reasons, it made sense to have him read aloud his essay during the Roman feast.

Wyatt shared his Economics “Enterprising Entrepreneur” project with the family as part of the entertainment for the Roman feast.

Wyatt chose to research Donald Trump for his Economics “Enterprising Entrepreneur” assignment. His research was focused on Donald Trump’s real estate success and business savvy that led him to the White House. Part of his grade was to present his project to an audience and allow them to ask questions afterwards. Sharing is easier when others share something too, so adding it to the entertainment of the Roman feast was perfect.

Guard against a few things when planning family sharing times within multiple guides.

There are a few things to guard against when planning for family sharing times within multiple guides. First, adding a lot of additional time to the day causes students who have more work to get behind. This may result in things being skipped in the guide they are actually responsible for completing. Or, it may result in a longer day, which makes being involved in the next family sharing time a negative.

Having everyone do everything in every guide adds unnecessary time to the day and confuses intended roles.

Second, having everyone do everything in every guide adds unnecessary time to the day as well. It was Emmett’s turn to lead the Roman feast. His brothers had their turn years’ back when they completed Creation to Christ. So, Emmett was in charge leading the event, and his brothers simply shared in the ‘entertainment’ part when called upon. The older two siblings were folded into the primary event of the Roman feast. In this role, though they may have thought they could lead it better, their place was on the sidelines. Being the encouraging audience was their role, rather than being the ‘star of the show.’

One must remember, Creation to Christ is not the guide they are completing. Likewise, when it was Riley’s turn to share his Essentials in Writing essay, his siblings took on the role of being the attentive audience. They were to be the encouragers, not the editors. Editing is Riley’s role in this Essentials in Writing assignment. Finally, when it was Wyatt’s turn to share his Economics Enterprising Entrepreneur presentation, his siblings took on the role being the attentive audience. Their role was not to interrupt but to listen. Time for a few questions was provided at the end, and that was the time for them to talk.

Time Wasters Versus Time Savers in This Particular Family Sharing

•Waster – having my middle son in World Geography share random things he is learning VERSUS…
•Saver – having him read aloud his Essentials in Writing assignment and edit it, which he needs to do anyway for his plans

•Waster – having my oldest son in U.S. History II share random things he is learning VERSUS…
•Saver – having him read aloud his Economics “Enterprising Entrepreneur” assignment, which is a required part of his plans

The only ‘expert’ in the sharing is the one carrying out the plans in his guide.

Respect for the one who is carrying out the plans within the guide is a must. There is no room for ‘tips’ on how to improve, for interruptions that distract, or for additional knowledge being shared. A positive sharing experience can quickly become a negative sharing experience if someone else is ‘always the expert.’ The only expert in the sharing is the one sharing. It is their turn to shine when it is their guide. Others will have a turn to shine when it is their guide’s assignment to do so. These are a few of the staples for creating an encouraging, safe environment to share learning together. Hope it gives you all some ideas!

P.S. If you want to read more on this topic, Carrie has excellent commentary on this. Check out her post from our message board to the commonly asked question “How will we be learning as a family, if we do separate guides?“