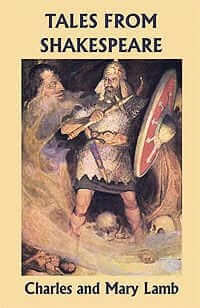 Originally published in the early 19th century by a brother and sister, these adaptations of Shakespeare’s fourteen comedies and six tragedies (retold in prose) were intended for children. Charles and Mary Lamb originally collaborated as a way to earn money as well as to introduce young readers to the works of the famous bard, preserving whenever possible “Shakespeare’s own words.”

The retellings of the plays are adapted to a length and simplicity suitable for older elementary or middle school students while retaining the complex plots and characterizations so familiar to readers of Shakespeare. The tales offer readers a taste of the comic and the tragic, and will provide the incentive to tackle the plays themselves at the high school level under proper adult guidance. Three centuries later, the Lambs’ adaptations remain a fine introduction to Shakespeare’s writings and are a must for the well-rounded library.

Note from Carrie: Why read Shakespeare?

During the early years of educating our children, I struggled with Charlotte Mason’s recommendation that children study Shakespeare. I was sure that Shakespeare wasn’t worth studying by my children due to the inappropriate jokes, adult content, and references to love-making within his plays. However, as I continued to study his plays and ponder his influence, I realized that there would be something missing in my children’s understanding of the English-speaking world if I neglected to teach them about Shakespeare. This is partly true purely for the reason that Shakespeare is responsible for contributing some 2000 words and phrases to the English language that are still in use today.

While Shakespeare’s plays were obviously not written for children, there is some merit in introducing children to his plays first in story form through Lamb’s Tales from Shakespeare. This aids students in their future understanding of his plays later in high school when they will read Shakespeare’s unabridged plays in original form.

In looking at the positive side of reading Shakespeare, his plays do look at both the virtues and vices of men. They show the consequences of sin, yet his characters often act mercifully. Shakespeare’s plays do refer to Christ and his teachings, and you can often see a resemblance in his plays to stories of other Biblical characters. Morals often play a decisive role in his plays, resulting in intricate plots that lead to consequences based on the character’s actions. The reader must work hard to follow the many plot twists and turns, which is great preparation for the reading of higher level books. Another benefit is that the tales are very entertaining and do much to stimulate the imagination.

While Shakespeare does include references to love-making, it’s important to note that the words ‘lovers’ and ‘love-making’ meant something different in Shakespeare’s day from the meaning of those same words today. During Elizabethan times, words such as ‘lover’ often meant sweetheart and ‘love-making’ meant an attraction between two people. This is different from the physical act of love that we associate with those same words today.

In our guide Resurrection to Reformation, parents will have the choice of whether to include Lamb’s Tales from Shakespeare within their weekly schedule. Students will read 18 of the 20 included tales, omitting Macbeth and Measure for Measure due to overly mature content. Readings are scheduled once weekly, and longer stories are divided over two weeks. After each weekly reading, students will color the accompanying black and white artwork within the Shakespeare Student Notebook pages. A quote from the play will also be copied from each tale. Due to the length of each tale, and to allow students to better understand the various plot twists better, students are assigned to read the stories on their own.

We do not attempt to analyze Shakespeare within the provided assignments, but rather to allow students to enjoy the readings and make their own natural connections. Often the moral connections that students make on their own are much stronger than those that would be made if we were to point out the “moral lessons” instead.

While we do not wish to persuade you to pursue Shakespeare if it is not within your family’s goals, we do desire to explain our reasoning for including it as a choice within our Economy Package. As you ponder the best path for your family, we will link you to an article that we found very interesting in our own ponderings about Shakespeare. (You can view the article here.)