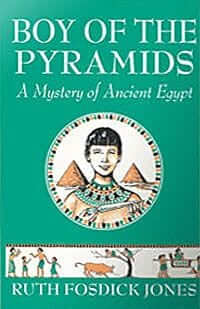 Boy of the Pyramids: A Mystery of Ancient Egypt

At any time and in any place, when there is a mystery to be solved, a ten-year-old boy will want to have a hand in it. So it was with Kaffe, an Egyptian boy of long ago. With his friend Sari, a slave-girl, Kaffe had many adventures-the harvest feast, the fight of the bulls, the flood. Then came the mystery of the pyramid’s missing jewels and a dark night when Kaffe, his father, and Sari set out to catch the thief.

Gentle, Yet Exciting, Mystery – No murders or mummy stories here. Readers are eased into the mystery of the missing jewels with some clues and characters among the first chapters, then the excitement builds as they set out to catch the thief.

Appropriate – Deals with some of the potentially sordid details of this ancient culture in a manner totally appropriate for children. It mentions some of the Egyptian gods and beliefs about death as part of the story, but does not dwell on them or sensationalize them.