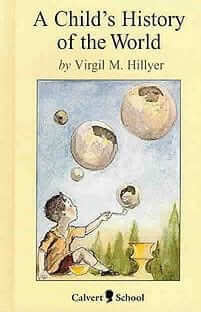 A Child’s History of the World

One of the finest history books for children, this well-loved Hillyer classic features stories of world history from creation through the 20th century, inspiring an appreciation of how events relate to one another. Told in a highly-engaging, narrative style, Hillyer is best as a read-aloud. This one-year history overview will help to provide a foundation for future history studies.

Our own children have loved listening to A Child’s History of the World, and we hope yours will too! Though it can take several read-aloud sessions to get used to Hillyer’s style, we feel your children will eventually be drawn in by this whirlwind tour through history just as ours were.

Note from Carrie regarding why she chose to include this book in Preparing Hearts For His Glory.

We chose to use Hillyer’s A Child’s History of the World because it is unmatched in its grandfatherly, story-telling style of conveying an overview of world history to children. We looked carefully at all of the alternatives currently available and felt that Hillyer’s 1920’s retelling has not been secularized like the many other texts available. It still contains Biblical history naturally interwoven with world history and tells the history of the Jews interwoven with the rest of world history. Hillyer tells about the tower of Babel, Abraham, Joseph, Moses, the Exodus, Samuel, Saul, Solomon, and Jesus.

We do choose to omit the first 3 chapters of Hillyer, which requires some explanation. In Chapter I, while Hillyer gives an evolutionary sounding view of how the world was created, he does show that he believed in God as the creator, when on p. 5 he says,” …before this, there was a time when there was NO WORLD AT ALL! Only the stars, and God, who made the stars.”

It is important to remember that many Christians during Hillyer’s time believed that evolution was a new scientific way of explaining the Bible. He also characterizes the worship of other gods in the following way: “The Greeks believed in many gods, not in one God, as we do, and as the Jews do.” “Their gods were more like people in fairy tales than like divine beings.” This gives us the idea that when Hillyer says “we”, he means Christians, and he is grouping himself there. That is Hillyer’s point of view throughout his writing (although he does not come right out and say that Jesus is the Son of God).

We omit Chapters 2 and 3, because Hillyer gives the Stone Age view of cave man, complete with grunting. Yet, he points out the obvious difference between man and animals in saying that man had “better brains” and could “think”. This was one way of reconciling the evidence of cave men with the Biblical account. In place of these chapters, we include resources such as The True Story of Noah’s Ark, Life in the Great Ice Age, and Grandpa’s Box that coincide better with the Biblical account and show that man was made in God’s image and so was very intelligent from the beginning.

Almost all of the other events Hillyer records are a part of historical record, so there is no need to question his overall accuracy. Throughout his presentation of history, you’ll find Hillyer continues to acknowledge God and is always respectful of Christianity. In screening literature, it is important to remember that there is only one truly infallible book and that is the Bible. All others require a discerning mind as you read.

You might even choose to read and discuss Hillyer’s opening chapters alongside our scheduled resources, if you wish to point out differences in world-views, keeping in mind the goal of the program is to be Preparing Hearts for His Glory.