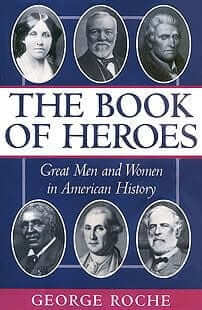 The Book of Heroes: Great Men and Women in American History

The stories of six real-life heroes are told in this book — unforgettable men and women whose contributions to American life continue to inspire others. Profiled are: George Washington, Daniel Boone, Louisa May Alcott, Robert E. Lee, Andrew Carnegie, and George Washington Carver.

George Washington, whose personal integrity and strength of character shone not only during the American Revolution, but during the great struggle to establish the U.S. Constitution and lead a new nation, conceived in liberty.

Daniel Boone, who was one of the first and greatest Western explorers, opening vast new territories to settlement. Filled with the pioneer spirit that made America great, his heroic exploits revealed independence, fortitude, and resourcefulness.

Louisa May Alcott, who served as a union army nurse and wrote the immortal novel Little Women, has helped shape the character and enrich the lives of millions of readers.

Robert E. Lee, was America’s best loved general and tragic hero. He exemplified the ideals of “Duty, Honor, Country” in the worst crisis America has ever faced – one that forced him to choose between his beloved Virginia, his family and friends, and the Union. Such was his reputation for nobility and virtue that he was revered by both North and South after the war, and he played a crucial part in healing the nation’s wounds.

George Washington Carver, the son of slaves who became one of America’s premier scientists and educators who taught “scientific farming.” He revolutionized the agricultural economy of the South, providing jobs, new skills, prosperity, and hope to thousands of poor farmers.

Note: We will omit Andrew Carnegie because we will not be studying the time period in which he lived until the next American history guide.