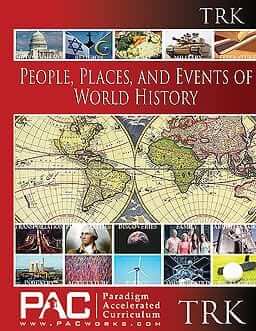 This course consists of six chapters that cover time from 5000 B.C. to 2011 A.D. The first chapter begins with evidence of civilization in the Fertile Crescent and expands from there to the major continents of the world. Throughout the six chapters of text, Biblical and Christian history is treated as fact; and related people, events, and quotations are interwoven as part of the telling of world history.

The writers incorporate a conversational, narrative style designed to engage students. Interesting vignettes on different aspects of the world’s cultures enrich the already interesting text. Selected vocabulary words are highlighted and defined to help promote understanding. Black-and-white illustrations, maps, and time lines are sprinkled throughout each chapter to create mental images that enhance comprehension of the People, Places, & Events of World History. This set of texts is used as one part of the study of world history in our Heart of Dakota guide. Combining multiple resources allows students to gain a fuller and richer understanding of world history as students read about history from the perspectives of varying authors.

There are honestly so many topics and people interwoven into the narrative of the six chapters of these texts that it would be difficult to list them all. Instead, here is a list of a smattering of topics from each chapter to give you an idea of the breadth of coverage.

You can see the first lesson of Chapter One here.