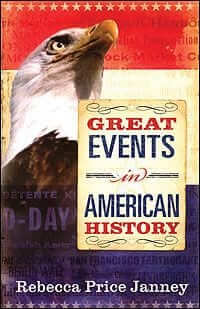 From the Spanish-American War in 1898 to the terrible events of September 11, 2001 – learning what happened on important dates helps us better understand the world in which we live! Packed with brief, compelling accounts of historic happenings, Janney’s resource offers glimpses of God at work in seemingly “secular” events.

The historical significance behind each included date is explained in a two to four page chapter. What sets this book apart is that the events are placed into the context of God’s kingdom, conveying this through anecdotes and excerpts from speeches and sermons taken from the time period covered in each chapter. For example, the D-Day (1944) chapter includes President Roosevelt’s prayer for the soldiers and their families.

Rather than a dry recounting of historical facts and figures, these stories will draw the reader into a fascinating account of major happenings that convey what happened from both a temporal and eternal perspective. Bibliographical references are provided at the end of each chapter.

Note: Missions to Modern Marvels begins using this book with events from 1890 forward. This book is scheduled for the student to read independently.