Discussion Board for users of Heart of Dakota Curriculum

This forum is for sharing what your week was like with Heart of Dakota. The goal is to post on Thursdays. You can share a picture, a blog link, a written synopsis, your favorite memory, or anything you want that shares your HOD excitement.

a- A picture
b- A blog Link
c- A written synopsis
d- Your favorite memory
e- Anything you want that shares your HOD excitement!

I know a few of us were starting the new school year this week and I'd like to hear how it went - please share! I don't have a blog so I'm sharing here.

DS6 did really well this week. He's been cooperating with the new schedule and accepting the higher workload with very little complaint. It must be all those prayers being offered up for me this week!

He has been engrossed in Pioneers and Patriots. Today he begged to read it but it's not scheduled! I told him we'd be back to it Monday and he moaned, "That's like three thousand days away!" He loves Benjamin West and His Cat Grimalkin and it's driving him nuts to only read a chapter a day but it sure is nice to see him so enthusiastic to get started each morning. He has fun with the physical activity that's with the memory verse practice. He has enjoyed the activities. Here he is working on his shield today:

I had considered continuing with R&S 2 since he'd already started it but I'm not so sure that I want him to do it all orally and I'm not sure about increasing his daily writing requirement even more so I did add it some days this week but then just did the day 5 scheduled grammar today instead. At this point I think I'll leave R&S 2 for Bigger. For spelling, I'm trying to figure out where he is in spelling. He over-knows the List 1 words up through Unit 8 so I might just go with List 2 for a couple of months or start List one from Unit 9 next week. I don't know. Would it matter?

Anyway, here are a couple more pictures. First is his illustration of the poem for this Unit. The picture on the right is "during the storm" (I'm guessing the rodent was fearful of flooding). Notice on the left, "after the storm", the tree is gone because it was consumed by the fire that was ignited by the lightning. During his recitation of the poem today, he added a line about the creatures during the storm.

And lastly, since he has already learned cursive but not quite to "fluency" yet, I used a free site to make up the copywork for him in cursive. He has had renewed interest this week in his handwriting.

Wow RecumbentHeart your son has beautiful handwriting! Hard to believe he's only 6!

Kristin
Mom to two girly girls (7 and 5) and boy/girl twins born May 2013
Have used LHTH, LHFHG, Beyond
Sharing our joy at http://www.broomandcrown.com
Top

Bigger week 22
http://stanleysmagicgarden.blogspot.co. ... ek-22.html
Nathan found a hornets nest in his shed this week.n empty one

but we enjoyed having a good look t their work.It tied in really well with our Pioneer sampler lessons from last week.This week we tried to make butter. 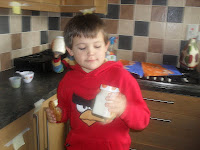 and it was cow appreciation day on Friday and we found this website
http://www.dairyfarmingtoday.org/dairy- ... ltour.aspx
- Delighted to have used LHTH,LHFHG and Beyond, Bigger , Preparing and DITHOR
currently Using
LHTH slowly with my 2 year old
Starting Bigger with my 8 y/o About to add on DITHOR
Finishing Preparing with my 12year with ASD/LD
Top

LHFHG weekly review
http://stanleysmagicgarden.blogspot.co. ... eview.html
I love the bible studies we do with LHFHG .
- Delighted to have used LHTH,LHFHG and Beyond, Bigger , Preparing and DITHOR
currently Using
LHTH slowly with my 2 year old
Starting Bigger with my 8 y/o About to add on DITHOR
Finishing Preparing with my 12year with ASD/LD
Top

RecumbentHeart, I agree that is impressive handwriting!! My 6.5yo still is a tad sloppy! I like getting a peek into what we will be doing next year when we start BLHFHG.

spidermansmum---I remember doing the Lazarus part! (and fwiw, I also get a similar or the same style when I get new glasses.

Thank-you for your kinds words, ladies. I will pass them on to my son and I know he will great appreciate them - he was working very purposefully on his handwriting last week.

I love to catch a glimpse of HOD in action in your homes!

What cute kiddos you have!

We started with my oldest child, per all your wonderful suggestions, at the end of June, then took a week break, and started back on this week. Here is a link to our work!
NOTE: This is exclusively Preparing, with Extension read of the Woolly mammoth book and DITHOR, level 6/7/8. In the next couple weeks, LHFHG...then Beyond...then a SUPER LITE LHTH will be included.

I went back and wrote a weekly update